Eighteen days of trials involving Britain’s next-generation stealth fighter aboard the USS Wasp provided vital information – and not just for pilots. A joint Royal Navy-RAF engineering team were on hand to test maintaining and arming the F35 Lightning II, which will provide the striking power of HMS Queen Elizabeth and Prince of Wales.

The F35 Lightning II will provide the punch of the Royal Navy’s two new carriers Queen Elizabeth and Prince of Wales – and will operate from land from RAF Marham.

The Anglo-American stealth strike fighter – two generations more advanced than the legendary Harrier it replaces – was put through its paces during its second concerted spell of sea trials recently during 18 days aboard the assault ship USS Wasp off the Eastern Seaboard of the USA.

While most of the media focus was on what was happening in the skies, equally-important lessons were being learned in the hangar courtesy of a maintenance team headed by Lt Cdr Robin ‘RTB’ Trewinnard-Boyle.

“To get up close and personal with the jet operating on board the Wasp was the highlight of my Royal Navy career,”

“This aircraft is awe inspiring and will definitely impress when it eventually operates from the UK, being a real asset for our defence for a great many years to come.”

He was one of two RN senior ratings – the other was POAET(M) ‘Ronnie’ Corbett – and an RAF sergeant (an armourer) who joined Lt Cdr Trewinnard-Boyle on the Wasp.

They not only carried out maintenance work on the two F35Bs embarked, but tested loading and unloading dummy weapons in its internal bomb bays (for stealth reasons unlike the Harrier, all the weapons are carried inside the aircraft, rather than slung on pylons beneath the wings).

“From a maintainer’s viewpoint, some things we learnt directly were how easy it is to manoeuvre the F35B around a relatively small flight deck, and how we can best do our job of launching, recovering and maintaining the F35B at sea,”

The officer says ‘exciting times lie ahead’ with further testing – including launching the jet from a ski ramp erected at the airbase.

He was involved in the final days of the Harrier as the senior air engineer aboard HMS Ark Royal in 2010, so he’s delighted to be at the heart of the rebirth of fast jet carrier operations.

“I loved the Sea Harrier and Harrier dearly, and they hold a very special place in my heart,”

“It was a great feeling to be at the beginning of seeing F35B operating at day and night from one of her natural environments – a flight deck.

“And it was another milestone on the way to making F-35B and HMS Queen Elizabeth a war-winning combination.” 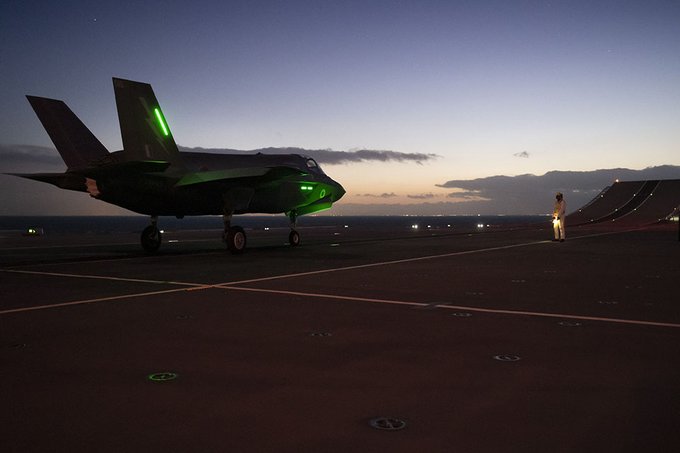