The fifth rotation of the Royal Australian Navy’s maritime security task force command group departed Australia on 19 November for a five-month deployment to the Middle East as part of the 29-nation Combined Maritime Forces in Bahrain.

The command element includes 25 Australian personnel and is responsible for conducting Maritime Security Operations in the Middle East and North Indian Ocean regions. CTF 150 works closely with coalition partners and regional nations to bring stability and confidence to the region.

Acting Chief of Joint Operations, Major General Shane Caughey, said the CTF 150 contingent would be undertaking an important job in protecting Australia’s ability to trade and to improve regional security and assist mariners at sea in some of the world’s most important shipping lanes.

“This fifth rotation of the Royal Australian Navy’s task force will continue the work of CTF 150 to provide a lawful and stable maritime environment free from terrorism, smuggling and other illicit activities,” Major General Caughey said.

“Australia has had significant success during the previous four rotations overseeing focused operations conducted with regional forces which demonstrates the professionalism of our people who form part of an international team.

“I thank these personnel and their families for undertaking this mission particularly as it falls over the Christmas, New Year and Easter periods. I want them to know that this command team will help make people’s lives safer in this important part of the world.

“This deployment continues the hard work of Navy personnel and the 32 individual warship deployments to Middle Eastern waters to maintain and improve maritime security as part of Operation SLIPPER since 2001.”

The principal mission of CTF 150 is to maintain maritime security and deter, disrupt and defeat attempts by International Terrorist Organisations to use the maritime environment as a venue for an attack or as a means to transport personnel, weapons and other materials. 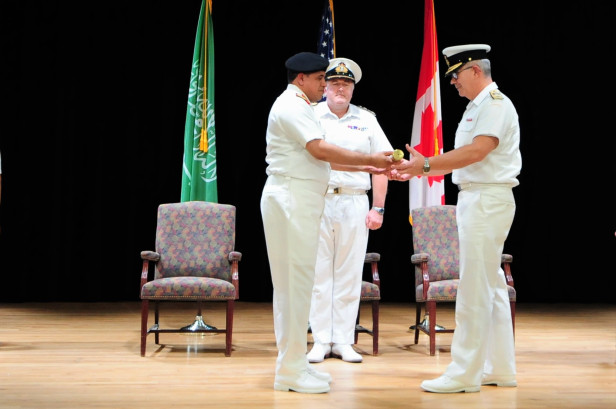