Personnel from the ship attempted to remove the same equipment three years ago from Brabant Island, the second largest island of the Palmer Archipelago within the British Antarctic Territory, but were thwarted by bad weather.

A party of Royal Marines initially went ashore to recce the site, returning with a three-metre long black metal sledge, which had been used to transport a skidoo by a Joint Forces expedition in 1983-5.

The following day a number of personnel were taken ashore by the ship’s Zodiac vessels, landing within sight of chinstrap penguins and a solitary leopard seal sunning itself on the pebble beach.

The previous day the Royal Marines had moved sacks of equipment to the beach, but other abandoned kit was stuck firmly in ice.

Working in teams, the crews also found maps, socks, photos and cutlery. One find, a culinary spice rack, was handed to one of Protector’s chefs, with the message “it may improve your culinary skills.”

The task took several hours and after clearing the site, personnel covered the ‘dig’ with fresh snow. Several tonnes of kit were taken back to Protector from Brabant, which lies off the west coast of the Antarctic Peninsula.

Earlier on her patrol Protector visited the British Antarctic Survey at Signy Island in the region’s South Orkney islands.

The island, situated below 60 degrees latitude to the North East of the Antarctic Peninsula, is home to a plethora of wildlife, including penguins and many different breeds of seal that on whole number more than 20,000, the most prominent being the Elephant Seal.

The only humans that inhabit the island are five scientists from the British Antarctic Survey. However, due to the severity of the Austral winter on the island, the huts are only occupied during the Austral Summer from November to April.

The scientists undertake a number of projects whilst accommodated on the island, which benefit from the remote and unspoilt ecosystem that thrives on and around the landmass.

A contingent of Royal Marines went ashore to the base while Protector, which was greeted by a pod of whales, negotiated the neon blue and white icebergs.

The ship’s survey motorboat James Caird IV surveyed the waters around the island before a number of Protector’s crew prepared to go ashore for the night.

Once a whaling station, the personnel landed alongside a wooden jetty on Signy. A crumbling concrete jetty sits off to the side of the buildings, and a huge rusting cylinder, several metres in length, floats in the shallows in front of the encampment, once used for boiling whale blubber; it is a potent reminder of the region’s principal industry in a bygone era.

Protector left Devonport in October 2015 and completed an historic patrol to the East Antarctic and Ross Sea. She is due to return to the UK this summer. 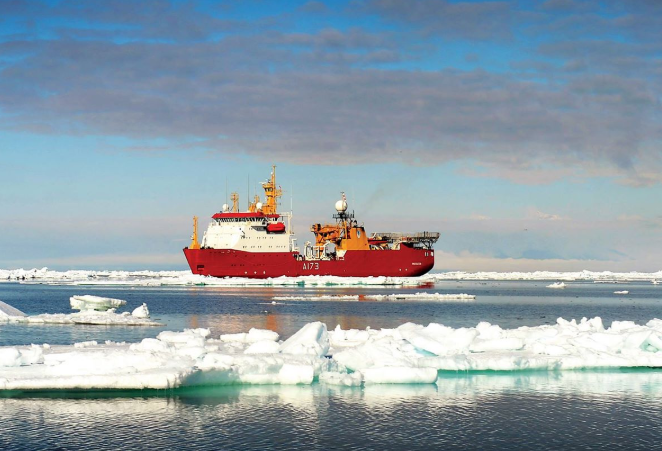