Turkish Navy assumed command of the Combined Maritime Forces’ Combined Task Force 151 (CTF151) from the Japan Maritime Self Defence Force (JMSDF) in a change of command ceremony on June 29.

The principal mission of CTF151 is to deter piracy and armed robbery in the maritime environment across an area of almost 3.2 million square miles, encompassing the Arabian Sea, Gulf of Aden, Somali Basin and Southern Red Sea. During the next four months the Turkish team will continue the work to deter pirates, reassure legitimate users of the high seas and facilitate the free flow of commerce across the area of operations.

Following an increase in piracy attacks off the coast of Somalia over recent months, CTF151 has worked in close coordination with the European Union’s task force, CTF465, and independent nations to patrol the Internationally Recommended Transit Corridor (IRTC) and regional waters, protecting shipping and deterring pirates.

On handing over command, Rear Admiral Fukuda said: “It has been an honor to command CTF151 over the last four months, leading a multi-national team from 11 nations.” He added: “I wish Rear Admiral Sezenler all the best during his tenure and look forward to hearing of his great success in command of CTF151.”

This is the fifth time that Turkey has led CTF 151. 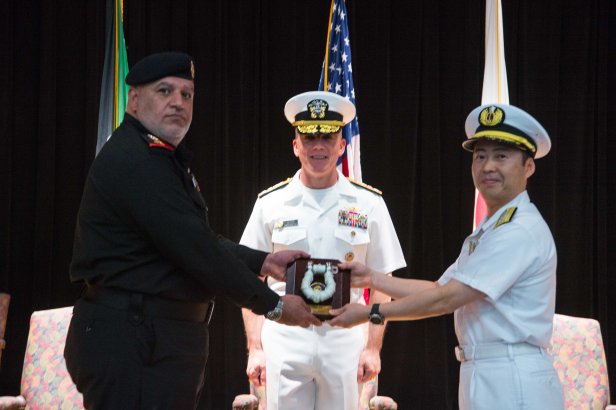