The U.S. Navy’s newest aircraft carrier USS Gerald R. Ford recovered and launched its first fixed-wing aircraft less than a week after being commissioned into the fleet.

The milestone took place off the coast of Virginia on June 28, with the first arrested landing occurring at 3:10 PM (EST) and the first catapult launch happening at 4:37 PM (EST).

“Today, USS Gerald R. Ford made history with the successful landing and launching of aircraft from VX-23 using the AAG and EMALS,” said Adm. Phil Davidson, commander, U.S. Fleet Forces. “Great work by the Ford team and all the engineers who have worked hard to get the ship ready for this milestone.”

“AAG and EMALS have been successfully tested ashore at Lakehurst, New Jersey, but this is the first shipboard recovery and launch of a fleet fixed wing aircraft,” said Capt. Rick McCormack, Ford’s commanding officer.

The software-controlled AAG is a modular, integrated system that consists of energy absorbers, power conditioning equipment and digital controls, with architecture that provides built-in test and diagnostics, resulting in lower maintenance and manpower requirements.

The mission and function of EMALS remains the same as the traditional steam catapult; however, it employs entirely different technologies. 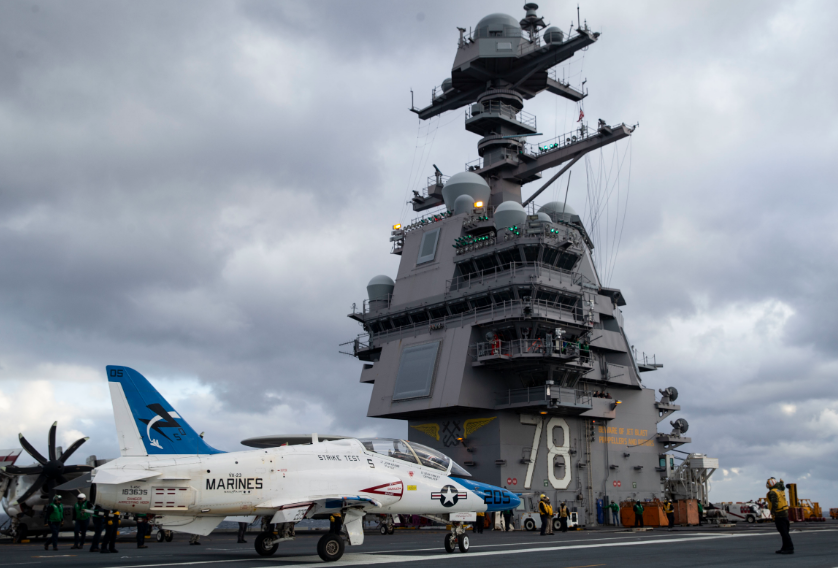