Royal Navy support ship RFA Tidesurge and Republic of Korea Navy’s lead Daegu-class frigate signed a bond of sisterhood, cementing their friendship with a long-standing tradition in the Asian country.

For the rest of their lives, ROKS Daegu and RFA Tidesurge will follow each other’s progress, share ideas, cultures and experiences.

Having been built side-by-side at the DSME Shipyard in South Korea, the respective crews of the two vessels have watched each other’s ships take shape over the past couple of years; the craft were even launched within two days of each other.

The sisterhood ceremony took the shape of more than just signing a piece of paper, but a football match and a traditional Korean meal hosted by the officers of the Daegu.

And the Koreans learned about the Royal Fleet Auxiliary, life aboard its ships an some of the recent humanitarian missions RFA vessels like Mounts Bay have been involved in.

Despite the very different ship types – and the distance between the UK and South Korea – the two navies do operate together fairly frequently, chiefly in the Indian Ocean in the ongoing effort to strangle terrorism/smuggling/drug trafficking.

As for the football, bolstered by younger and fresher legs from the DE&S project team who are overseeing the Tide-class project in Okpo-dong, the Brits triumphed over 90 minutes.

The sisterhood day ended with a Korean barbeque dinner, which gave the RFA sailors a chance to understand a little of Korean culture and etiquette and appreciate the Korean love of karaoke.

“The sisterhood ceremony between Daegu and Tidesurge was a special occasion for two ships starting life together in the same yard, building together for the future,” said the RFA vessel’s Chief Officer Andy Ford.

“In this tradition two ships form a lifelong relationship based on mutual respect, a wish to learn about one another’s culture and to strengthen the bond between our two nations.”

Tidesurge is the third of four large Tide-class tankers built to resupply Queen Elizabeth-class carriers and their battlegroups. Tidespring is on trials around the UK, Tiderace is being fitted with UK military kit in Falmouth and Tideforce is in the later stages of fitting out. As for Tidesurge, she’s undergoing trials off the Korean peninsula. 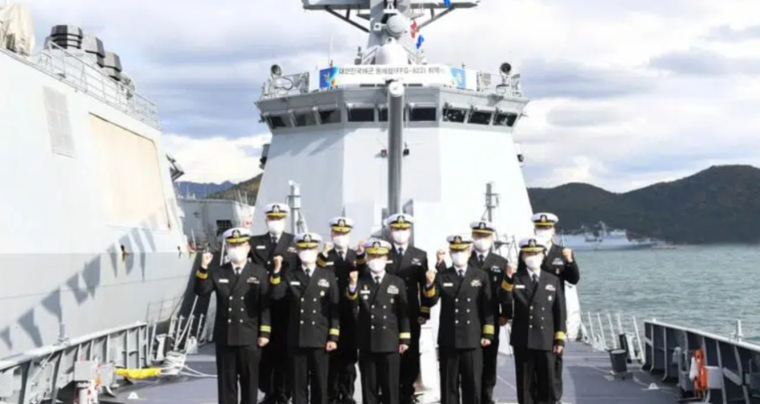