The Royal Australian Navy’s recently-commissioned destroyer HMAS Hobart recently added an MH-60R Seahawk helicopter to the list of her capabilities, certifying its deck for helicopter handling.

At the center of the undertaking was Australian Navy’s Aircraft Maintenance And Flight Trials Unit. Aero-systems testing officer, Lieutenant Chris Prescott said the trial was history in the making.

“The partnering of the MH-60R Seahawk and destroyer brings about an unprecedented level of capability for the Royal Australian Navy,” he said.

“Both platforms are at the forefront of technology and usher in a new era of interoperability, within the Australian Navy and with the militaries of allied nations.”

The union between 816 Squadron’s Romeo Flight 6 and HMAS Hobart has been in the planning since May, and included an aircraft approach, landing, and subsequent launch.

The trial also included testing of the new Aircraft-Ship Integrated Secure and Traverse system for the helicopter’s straightening and traversing in and out of the hangar.

“This was a big highlight as it was first time the system has been used in an Australian warship,” Lieutenant Prescott said.

The first-of-class trial was conducted alongside Garden Island in order to reduce the risks associated with landing at sea.

“It may seem like a benign task and landing on ships at sea is something we do all the time,” Lieutenant Prescott said.

On completion of the trials, the Defence Aviation Safety Authority will issue the destroyer with an aviation facilities certification.

Hobart will return to sea early next year with an MH-60R helicopter embarked in order to continue trials and develop safe ship helicopter operating limits. 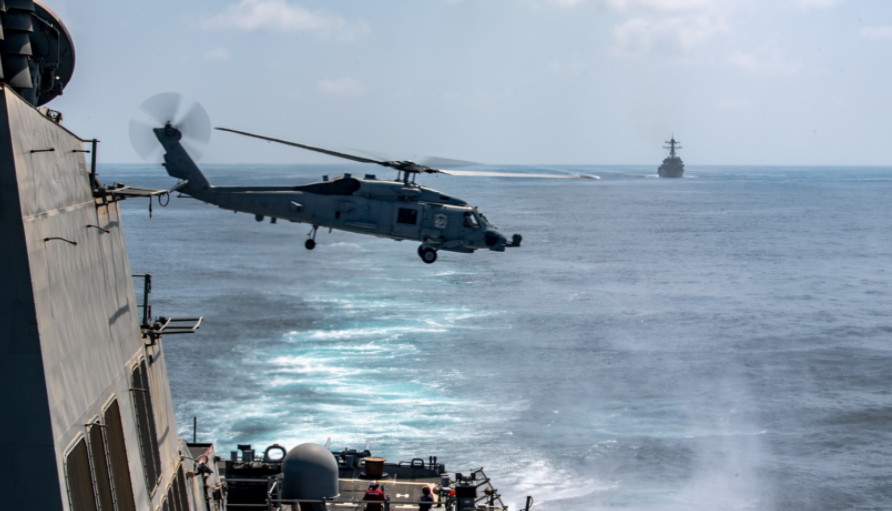