New info released on discovery of “holy grail of shipwrecks”

A 2015 expedition aboard the Colombian Navy research ship ARC Malpelo discovered the famous shipwreck of 300-year-old Spanish ship San José which is believed to have sunk with a cargo gold, silver, and emeralds worth billions of dollars.

The shipwreck was discovered on November Nov. 27, 2015, but Woods Hole Oceanographic Institution (WHOI), one of the expedition participants, just recently obtained authorization by Maritime Archaeology Consultants (MAC), Switzerland AG, and the Colombian government to release new details from the successful search.

The MAC survey team and WHOI researchers were able to confirm the wreck’s identity off Colombia after deploying a REMUS remotely operated vehicle to descended to just 30 feet above the wreck where it was able to capture photos of a key distinguishing feature of the San José—its cannons.

San José, a 62-gun, three-masted Spanish galleon ship which is often called the “holy grail of shipwrecks,” went down with a treasure of gold, silver, and emeralds in 1708 during a battle with British ships in the War of Spanish Succession.

The ship was found more than 600 meters below the surface during a search initiated by MAC and approved by The Colombian Ministry of Culture. The search was supervised by Instituto Colombiano de Antropología e Historia (ICANH) and Dirección General Marítima (DIMAR).

“In order to ensure a successful search, we retained the services of Woods Hole Oceanographic Institution, which has an extensive and recognized expertise in deep water exploration,” said MAC’s chief project archaeologist Roger Dooley. “This partnership was key to the discovery of the San Jose.”

WHOI played a crucial role in both the search and discovery of the final resting place of the San José, which had remained a great mystery to marine archeologists, historians, governments, and treasure hunters for decades. Specifically, the institution provided and operated an autonomous underwater vehicle called REMUS 6000 to survey an area off Colombia’s Barú Peninsula.

Finding high-profile wrecks is nothing new for REMUS, which played an instrumental role in finding the wreckage of Air France 447 in 2011. The airplane had crashed in 2009 several hundred miles off the northeastern coast of Brazil and landed deep in the ocean on some of the most rugged seafloor terrain on Earth. REMUS was also used to map and photograph the Titanic wreck site during a 2010 expedition.

The San José discovery carries considerable cultural and historical significance for the Colombian government and people because of the ship’s treasure of cultural and historical artifacts and the clues they may provide about Europe’s economic, social, and political climate in the early 18th century. The Colombian Government plans to build a museum and world-class conservation laboratory to preserve and publicly display the wreck’s contents, including cannons, ceramics, and other artifacts.

REMUS was initially deployed off the Malpelo to survey an approved area in June 2015. The overall search area was divided into search blocks, and in the initial blocks surveyed, the shipwreck was not found. Unfortunately, the entire area of search blocks could not be completed in this first expedition due to time constraints. In November, the WHOI team along with MAC and under the supervision of ICANH and DIMAR, returned to the search area determined by previous historical research to finalize the survey in the blocks that had not been completed.

“During that November expedition, we got the first indications of the find from side scan sonar images of the wreck,” said Purcell. “From those images, we could see strong sonar signal returns, so we sent REMUS back down for a closer look to collect camera images.”

To confirm the wreck’s identity, REMUS descended to just 30 feet above the wreck where it was able to capture photos of a key distinguishing feature of the San José—its cannons. Subsequent missions at lower altitudes showed engraved dolphins on the unique bronze cannons.

“The wreck was partially sediment-covered, but with the camera images from the lower altitude missions, we were able to see new details in the wreckage and the resolution was good enough to make out the decorative carving on the cannons,” said Purcell. “MAC’s lead marine archaeologist, Roger Dooley, interpreted the images and confirmed that the San José had finally been found.”

The REMUS 6000 is owned by the Dalio Foundation and operated by WHOI under an operations and maintenance agreement.

Photo: To confirm the wreck’s identity, REMUS descended to just 30 feet above the wreck where it was able to capture photos of a key distinguishing feature of the San José—its cannons. Photo: WHOI 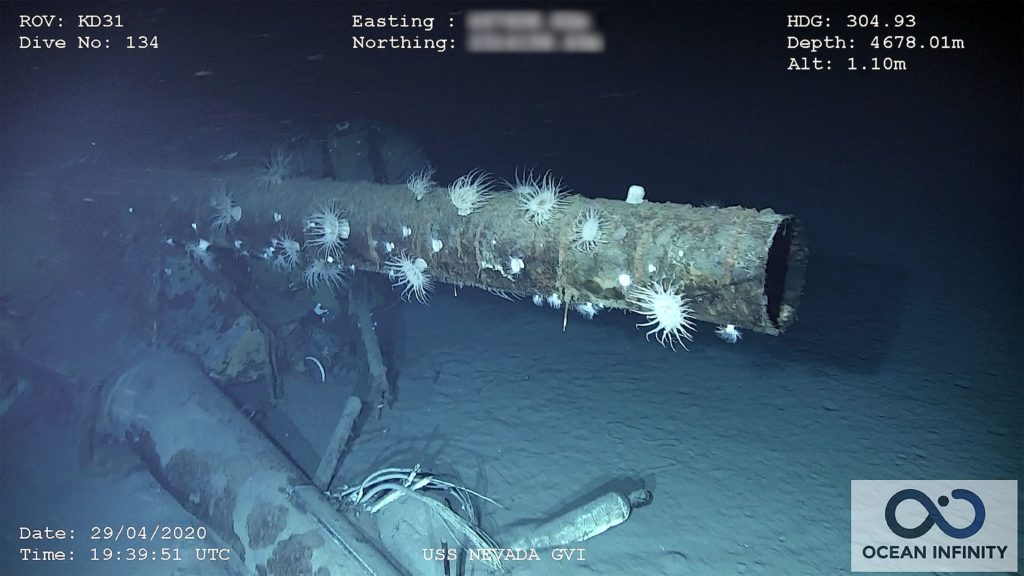