The three-day fly-on and requalification of flight deck crew and aircrew involved more than 60 aircraft and included a pre-patrol embark of 1,900 sailors who maintain and equip them.

“This is a significant first step in reforming the Freedom/Badman team,” said Capt. Forrest Young, commander of CVW-5. “The fly-on and carrier qualifications were conducted safely and professionally, and now this team is ready to complete our training that will ensure we are prepared to support Carrier Strike Group 5 throughout the 2018 patrol season.”

CVW-5 is the air combat arm of Battle Force 7th Fleet, with warfighting assets that include the F/A-18E/F Super Hornet, EA-18G Growler, C2-A Greyhound, MH-60R and MH-60S, as well as the latest addition of the E-2D Hawkeye.

“It’s great to be reunited with our air wing team and impressive how seamlessly this force comes together as an effective fighting unit,” said Capt. Buzz Donnelly, Ronald Reagan’s commanding officer. “Carrier Air Wing 5 is a critical piece to our mission of promoting peace and stability in this region, and the agility that we have to respond to any contingency.”

Following the air wing fly on, the ship and air wing team completed an annual certification of flight deck operations and aircrew carrier qualifications for more than 100 pilots and 60 aircraft based out of Naval Air Facility Atsugi and Marine Corps Air Station Iwakuni, Japan. Ronald Reagan and CVW-5 completed more than 200 “touch-and-gos” and almost 500 arrested landings to qualify pilots in preparation for operations in the 7th Fleet area of operations.

Accomplishing this major milestone so efficiently after months of being in port and ashore, reflects the high readiness for operations required as Forward Deployed Naval Forces, said Donnelly.

“Our constant training and mission-ready focus, even when the ship and air wing are not operating together at sea,” said Donnelly, “allows us to come back together very effectively and efficiently to respond to any situation.”

CVW-5’s mission is to conduct carrier air warfare operations and assist in the planning, control, coordination and integration of nine air wing squadrons in support of combat operations.

Photo: An F/A-18E Super Hornet lands on the flight deck during carrier qualifications with the USS Ronald Reagan (CVN 76). Photo: US Navy 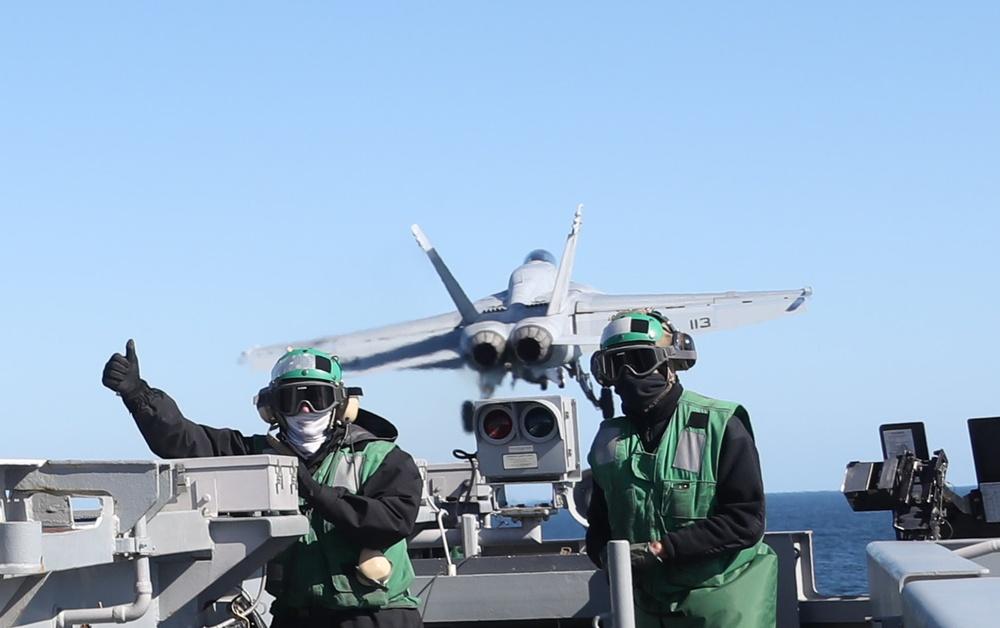