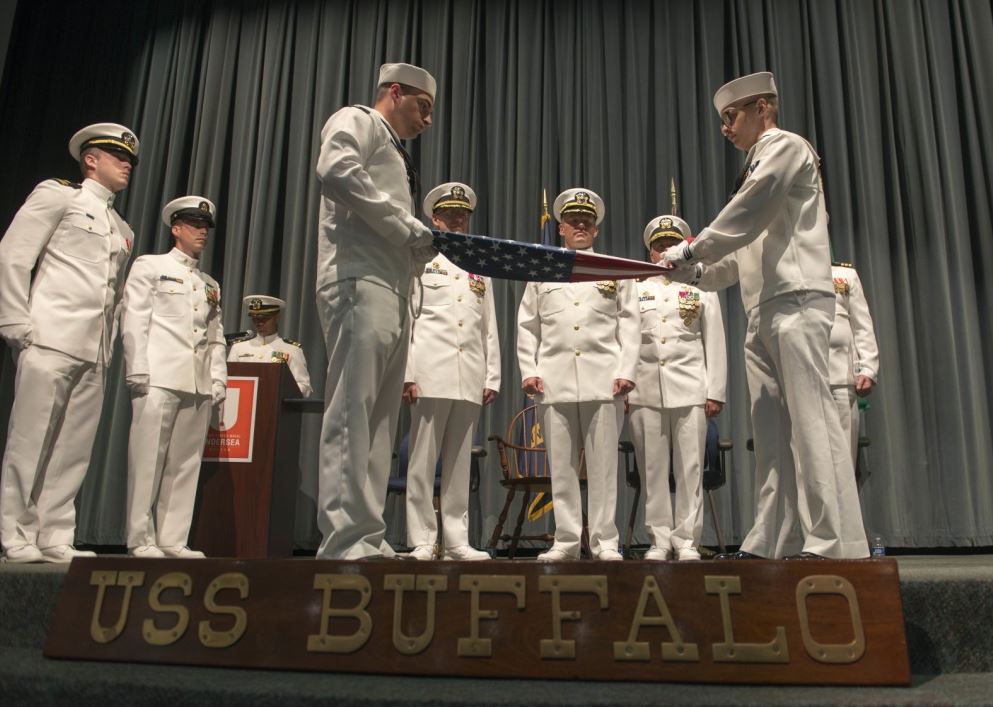 The occasion marked the submarine crew’s final public event before the submarine is officially decommissioned in the controlled industrial area (CIA) at Puget Sound Naval Shipyard (PSNS) in Bremerton, Washington.

“Today we will be talking proud as we celebrate USS Buffalo (SSN 715),” said Buffalo’s executive officer Lt. Cmdr. Joshua Ragadio. “She is the third of her name, 28th of its class, and the 24th to be commissioned; she is silent thunder, the tip of the spear, the warrior of the deep. We are here to recognize the plethora of accomplishments earned by this mighty fine warship, the places she has gone and the things she has seen. Most importantly we are here to celebrate all the officers, chiefs, and Sailors who proudly served.”

Supporters, Navy League members, representatives from the city of Buffalo and former crew members attended the ceremony to reunite with old shipmates and bid the submarine farewell.

When a commissioned US Navy ship is decommissioned, it is taken out of active service and the crew is reassigned to another ship or command. Inactivation is the process in which the submarine will be de-fueled, with the hull retained in safe storage until decommissioning.

“We anticipate that sometime in early February, on a cool, damp day here in the Pacific Northwest, behind the security of Puget Sound Naval Shipyard’s Controlled Industrial Area and with little fanfare, myself, along with the executive officer, chief of the boat, a small fraction of the crew and a handful of shipyard personnel will witness the commissioning pennant hauled down and the ensign lowered for the final time aboard Buffalo,” said Cmdr. Paul Lee, Buffalo’s final commanding officer.

“Today’s ceremony is our opportunity to bring together current and former crewmembers and families, members of our inactivation project team, and a number of our brothers and sisters in our profession of arms to remember and to truly appreciate the sacrifices of the crew and their families and say goodbye to the 6,000 tons that we called home.”

The ceremony concluded with the lowering of the national ensign along with a symbolic securing of the watch.

Buffalo completed their last deployment December 23, 2016. During their final 7-month deployment to the Western Pacific region, Buffalo visited Singapore, participated in cooperative exercises with the Indonesian and Republic of Singapore navies, and had 25 crew members receive their submarine warfare qualifications, or “dolphins”. Buffalo departed Joint Base Pearl Harbor-Hickam in Pearl Harbor, Hawaii for a homeport change to Bremerton, Washington, May 1, 2017 for decommissioning.