Britain’s biggest warship is currently conducting flight testing off the east coast of the United States and part of that is practicing landing in darkness.

These tests were carried out with and without the aid of night-vision technology, with the pilots and aircraft handlers successfully guiding the fast fighter jets onto the flight deck.

Pilots initially flew in using only ambient light and the lights on the carrier’s deck before later conducting landings using the night-vision capability in their helmets.

Commander James Blackmore is the Commander Air in HMS Queen Elizabeth, who is referred to as simply ‘Wings’ by the ship’s company. He said: “The concept of night flying isn’t difficult for us. What we are looking at is what the new lights on board HMS Queen Elizabeth look like at night from the perspective of the F-35s.

“We’ve already done that with the rotary wing aircraft earlier this year, but now it’s crucial that we understand how suitable they are for the F-35s to operate at night from the carrier. First indications are that they are in good order for both the aided and unaided perspectives.” 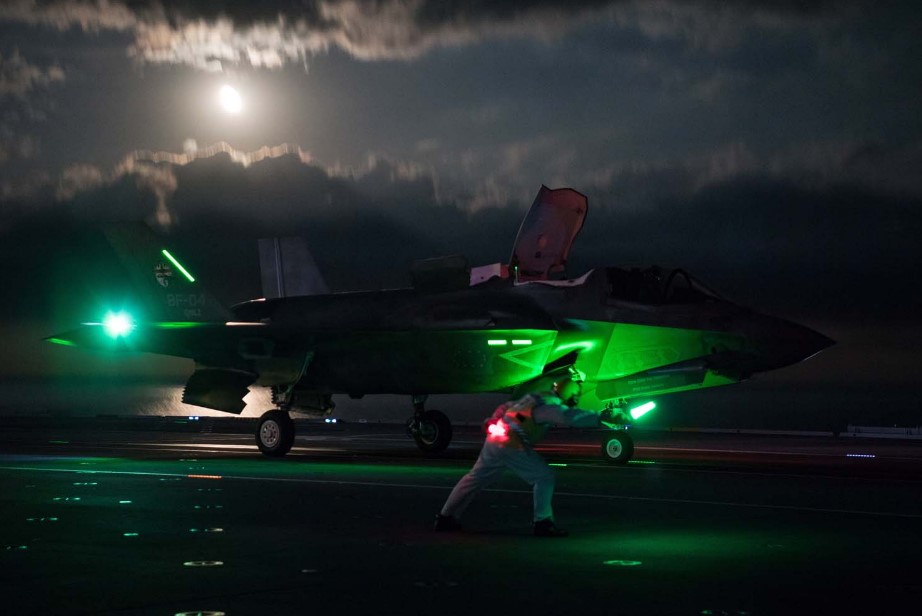 The stealth F-35 jets flew from HMS Queen Elizabeth for the first time last week. Royal Navy Commander Nathan Gray and RAF Squadron Leader Andy Edgell were the first pilots to make history by landing their aircraft on the flight deck of the carrier.

Now the flying trials have moved on to the next phase, including the night-time flying which up until now has only been tested in simulators or on the ground.

Using the night-vision technology doesn’t always make landings easy as even the smallest light becomes ultra-bright when it is viewed through the specialist equipment.

Andrew Maack, the Chief Test Engineer for the Integrated Test Force – the organization responsible for analyzing the flight trials – added: “In daytime there are cues that tell the pilot’s brain what the relative motion is between the airplane and the ship.

“At night, especially very dark night, all those cues go away and you become dependent on exactly what the lights are and what the sight of those lights looks like. It’s something you can’t translate in your mind ahead of time – you don’t know it until you see it.”

HMS Queen Elizabeth left her home port of Portsmouth in August, crossing the Atlantic to conduct the flying trials as well as training with the US Navy.

More than 1,400 sailors, flight crew and Royal Marines have been working on board the carrier during her deployment.

HMS Queen Elizabeth is on track to deploy on global operations from 2021. Meanwhile, the UK has now taken delivery of 16 out of a planned 138 F-35 jets that will be used by the Royal Navy and Royal Air Force.