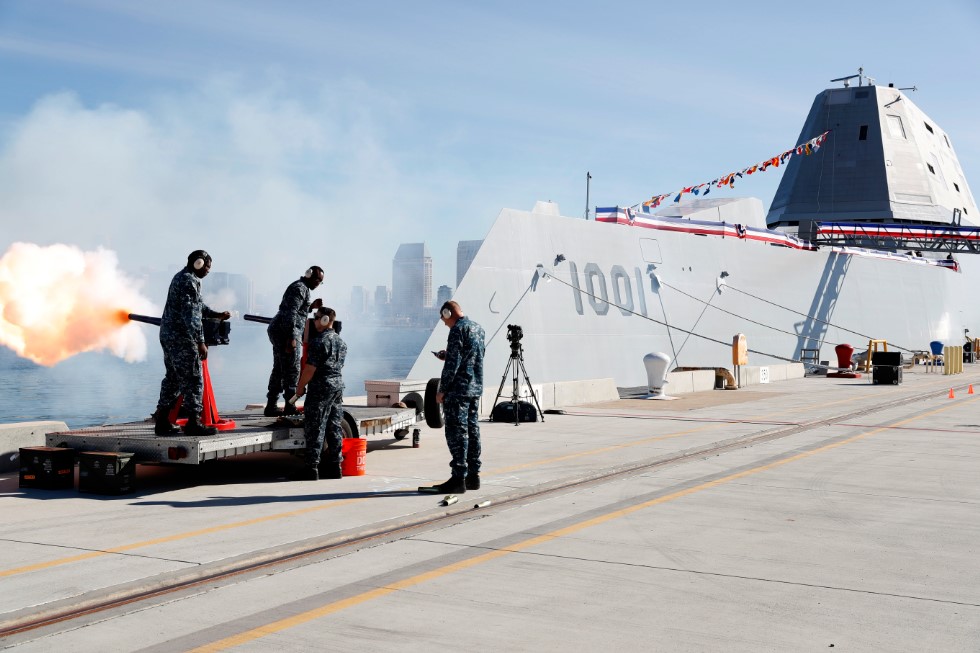 The ship honors Petty Officer 2nd Class Michael Monsoor, a Navy SEAL who was posthumously awarded the Medal of Honor for his heroic actions in Ramadi, Iraq, Sept. 29, 2006. At the ship’s 2008 naming ceremony, former Secretary of the Navy Donald C. Winter recognized Monsoor as “a consummate professional who faced terrorist enemies with aplomb and stoicism.”

“When you man the rails today and you man your first watch stations at [general quarters], you bring this ship to life in the spirit and legacy of Michael Monsoor with toughness, courage and love, and you will be the defenders,” said Vice Adm. Timothy Szymanski, deputy commander of US Special Operations Command. “You will defend. Stay in the Fight.”

“Monsoor is an incredible honor that the Navy has bestowed upon him and his family,” said Chief Warrant Officer Benjamin Oleson, one of Monsoor’s teammates in Ramadi. “I went out to the christening event, and I was completely blown away [by] the sheer size of what this ship represents. I think if Mikey saw the ship, he’d be like, ‘That’s too much. That’s not for me. I’m just laid back.’ But I think it’s truly an honor that the Navy did this, especially the type of destroyer that it is. … [with] its cutting-edge, advanced technology. I think, with Mikey in the platoon, always at the front, leading the way, the way the ship is designed, it’s going to be leading the way in the future.”

“‘You never quit.’ Those are the words Michael Monsoor wrote with permanent marker inside the camouflage hat he wore throughout his [Basic Undersea Demolition School] training at the Naval Special Warfare Training Center here at Coronado,” said Peters. “If you visit the quarterdeck of the magnificent new ship we commission this morning, you will see his hat there with those words inscribed within it. It is encased in glass where it will remain on display permanently for the life of the ship. The letters are faded from time and wear but their significance and how Michael applied them to his life are as vivid and meaningful today as they were that day when he wrote them many years ago as his reminder to persevere. The words ‘you never quit’ are also brandished prominently throughout the ship as if Michael himself is offering encouragement to every man and woman who sets sail upon her.

Sally Monsoor, Michael Monsoor’s mother, served as the ship’s sponsor and delivered the time-honored first order to “man our ship and bring her to life!” The crew of 148 officers and enlisted personnel were joined by service members who served with Monsoor in Ramadi as they raced aboard to man the rails and watch stations.

“I can’t go without saying thank you for coming today,” said Monsoor. “You came because you were following his story and you cared. Thank you to our military men and women, the best in the world, SEAL Team, you have our hearts.”

Capt. Scott Smith noted the crew’s dedication to the ship and one another as well as the community in Maine. He credited then with carrying forward the character of the ship’s namesake.

“They not only learned new technologies, they advanced them, and stand today at the leading edge of the Navy our nation needs,” said Smith. “This is the crew that mans Michael Monsoor: 143 Sailors performing acts they believe are ordinary. The Soldiers and SEALs that stand alongside them, they too perform their seemingly anonymous, ordinary acts which are anything but, and ladies and gentlemen that’s why this ship is so important. Because it is the recognition that the true source of American power lies in its people.

“In all of the descriptions of Michael a consistent theme emerges: He was a good dude,” said Smith. “He was good. He affected the lives of those who served alongside him and through his example, he continues to affect history and will as long as this ship sails. This is what we give you today: the good ship Michael Monsoor.”

The nearly 16,000-ton Michael Monsoor was built by General Dynamics Bath Iron Works in Bath, Maine. The ship is 610 feet in length, has a beam of 87 feet, and a navigational draft of 27 feet. The ship is powered by two Rolls-Royce main turbine generators, two Rolls-Royce auxiliary turbine generators, two 34.6 MW advanced induction motors to speeds up to 30-plus knots.

Zumwalt-class destroyers are the most lethal and sophisticated destroyers ever built. They provide deterrence and forward presence by bridging today’s innovation with future technology.

Zumwalt-class destroyers maximize stealth, size, power and computing capacity – fielding an array of weapons systems and cutting-edge technologies to fight forces in the air, on and under the sea, and on land.

USS Michael Monsoor will be homeported at Naval Base San Diego, California.