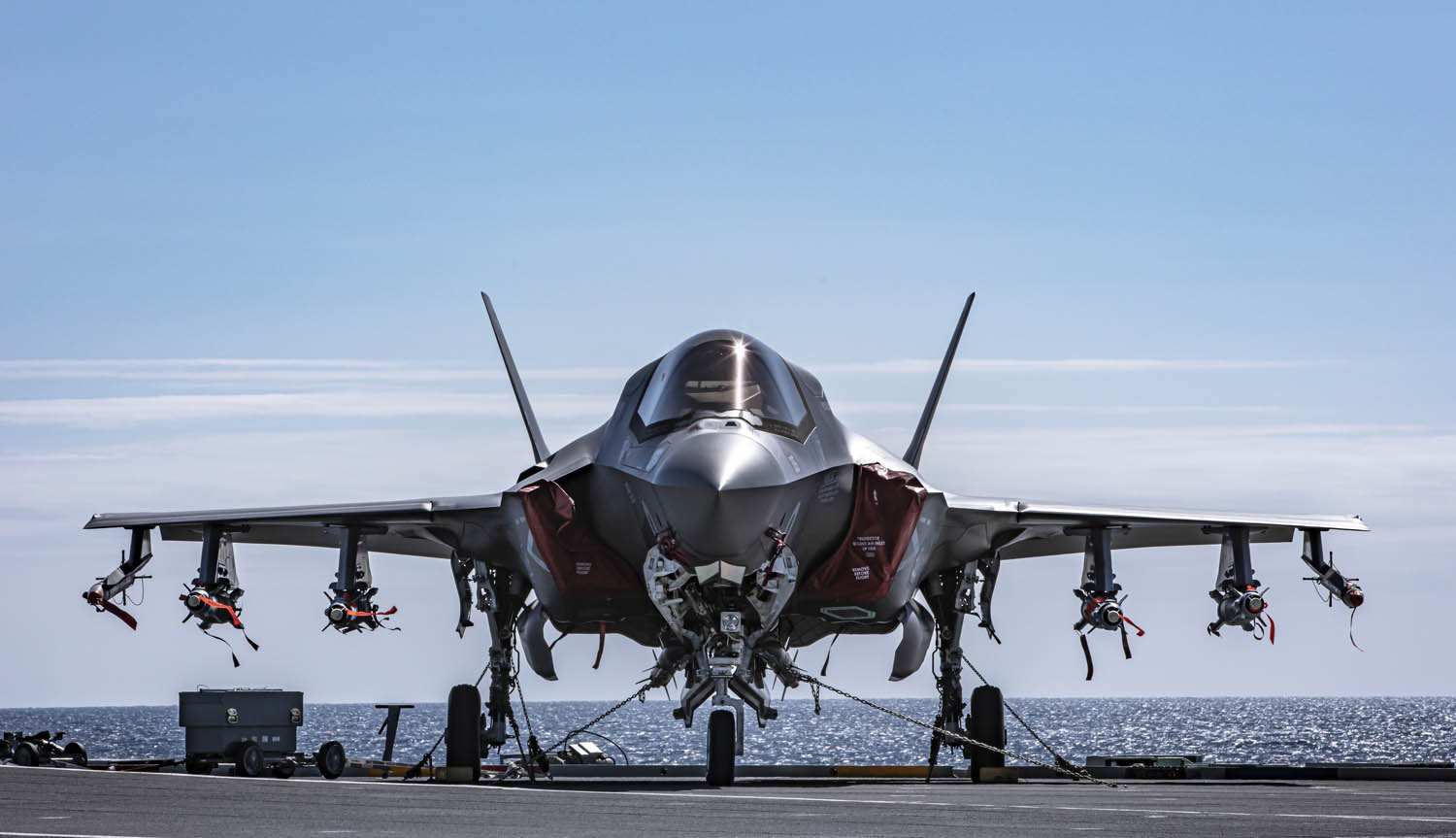 Royal Navy aircraft carrier HMS Queen Elizabeth is currently undergoing extensive F-35B flight trials with the aim of determining the operational limits of both the ship and the fifth-generation stealth jets it is poised to operate.

One of the trial evolutions included loading one of the jets with weaponry it would typically carry on a strike mission: 22,000lb of destructive and defensive power.

In this case the ‘bombheads’ on HMS Queen Elizabeth – red-surcout-wearing air engineer technicians – loaded inert Paveway laser-guided bombs and ASRAAM air-to-air missiles (for taking out aerial threats) on to the external pylons and bomb bay.

Fully-loaded, it’s known as “beast mode” by crews because of the firepower it delivers – nearly three times more than a Harrier, twice as much as a WW2 Lancaster heavy bomber.

To keep numbers of personnel on board the ship to a minimum, most of the process of getting the firepower from the magazines in the bowels of the 65,000-tonne warship to the flight deck is automated.

Instead the Highly Mechanised Weapon Handling System – unique to the Queen Elizabeth class – uses a network of tracks, upon which a number of weapon-carrying mechanical ‘moles’ move, remotely controlled from operator consoles.

The moles carry weapon loads on pallets to the ship’s weapon preparation areas or hangar via a system of hydraulic lifts which run through the heart of the carrier.

The system is highly automated – and fitted with safety features to prevent any wrong moves.

Once the air weapons have been prepared by technicians in the preparation areas, they are moved to the flight deck via another set of lifts, from where they can be wheeled on trolleys to the aircraft themselves.

The Royal Navy says a system like this has never been fitted to a ship before and allows weapon moves with far fewer people involved than more traditional manual handling methods, supporting a greater rate of weapon re-supply to aircraft and therefore a better mission sortie rate.

Six F-35s are now embarked on the UK’s future flagship off the East Coast of the USA, plus Merlin helicopters of 820 NAS (providing anti-submarine warfare protection) and 845 (general duties, search and rescue, commando carrying) as the Carrier Air Group hones its skills for the first time, building up to HMS Queen Elizabeth’s maiden deployment in 2021.