US Navy to christen its twelfth Expeditionary Fast Transport ship

The US Navy will christen its newest Expeditionary Fast Transport, the future USNS Newport (T-EPF 12), during a ceremony at the Austal USA shipyard in Mobile, Alabama, on November 9.

“This ship honors the city of Newport, Rhode Island, and serves as a reminder of the contributions the community has and continues to make to our Navy,” said Secretary of the Navy Richard V. Spencer.

As informed, this is the fourth navy ship to bear the name Newport, the second in 1944 and the third in 1969.

EPF class ships are designed to transport 600 short tons of military cargo 1,200 nautical miles at an average speed of 35 knots. The ship is capable of operating in shallow-draft ports and waterways, interfacing with roll-on/roll-off discharge facilities, and on/off-loading a combat-loaded Abrams main battle tank (M1A2).

The EPF includes a flight deck for helicopter operations and an off-load ramp that will allow vehicles to quickly drive off the ship. EPF’s shallow draft (less than 15 feet) further enhances littoral operations and port access. This makes the EPF an extremely flexible asset for support of a wide range of operations including maneuver and sustainment, relief operations in small or damaged ports, flexible logistics support, or as the key enabler for rapid transport. 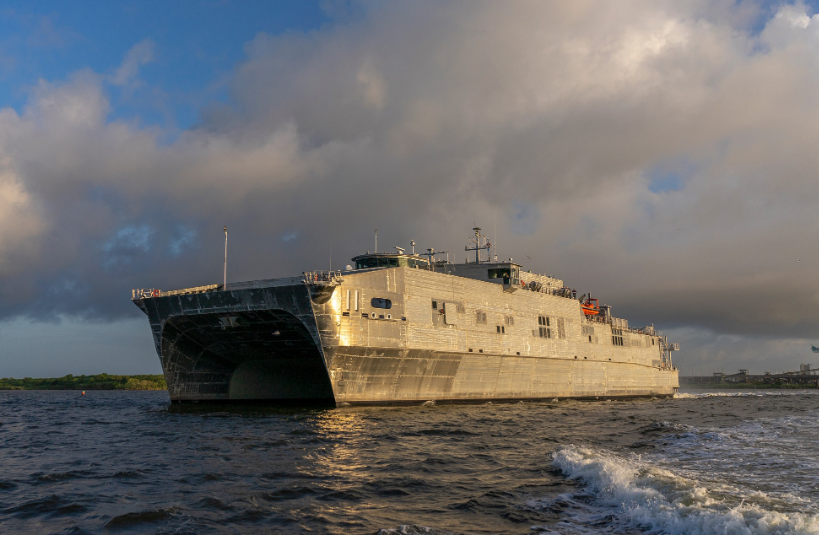