Advertisement
Back to overview
Home naval-today French frigate seizes 3,000 kg of hashish in Gulf of Oman

French frigate seizes 3,000 kg of hashish in Gulf of Oman

On January 18, less than two weeks after its first drug bust of 2020, French frigate Courbet (F 712) made the second drug bust while operating in direct support of Combined Task Force 150 (CTF 150).

As informed, over 3,000 kg of hashish was discovered on the dhow in the Gulf of Oman, with an estimated regional wholesale value of over USD 1,500,000.

Using its shipborne helicopter, the frigate identified and tracked a suspicious dhow sailing in their area of operations. A boarding team, including a drug detecting dog, was dispatched in Courbet’s Rigid Hull Inflatable Boat (RHIB) to search the vessel, with significant results.

Since Australia assumed command of CTF 150 in December with staff from the Royal Australian, Royal Canadian and Royal New Zealand navies, FS Courbet has been a key enabler in CTF 150’s mission to disrupt terrorist organizations and their related illegal activities by restricting their freedom of maneuver in the maritime domain.

The activities of CTF 150 are a critical part of global counter-terrorism efforts, as terrorist organizations are denied a risk-free method of conducting operations or moving personnel, weapons or income-generating narcotics and charcoal.

Courbet has conducted five boardings in the last six weeks, with three netting 8 tons of hashish with an estimated regional wholesale value of USD 4.1 million.

In December 2019, the UK Royal Navy’s ship HMS Defender, working in direct support of CTF 150, also seized 131 kg of crystal methamphetamine. The haul had an estimated regional wholesale value of over USD 280,000, the largest seizure of crystal meth in the Combined Maritime Forces’ history.

“With this seizure, we are again demonstrating to organized criminals and terrorists that they cannot maneuver freely here, they cannot conduct their illegitimate trade without considerable risk, and that CTF 150 will continue its mission to promote security and stability in this region,” Commodore Ray Leggatt, Royal Australian Navy, Commander of CTF 150, said.

CTF 150 is one of three task forces operating under Combined Maritime Forces (CMF), a multinational naval partnership that exists to promote security, stability and prosperity across approximately 3.2 million square miles of international waters encompassing some of the world’s most important shipping lanes. The 33 nations that comprise CMF share intelligence, assets and capabilities. 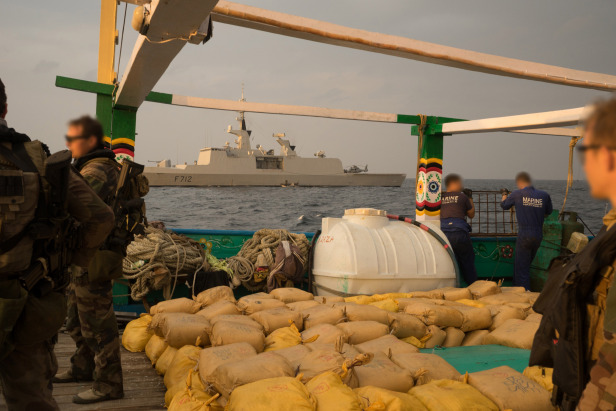