The US Coast Guard Cutter Tahoma returned to homeport at Portsmouth Naval Shipyard in Kittery, Maine, Monday, after a 66-day patrol in the Eastern Pacific Ocean and Caribbean Sea.

During the patrol, on Sept. 9th, the Tahoma crew pursued a “Go-Fast Vessel” to verify the vessel’s nationality. With the assistance of a maritime patrol aircraft, the Tahoma’s pursuit team closed in on the Go-Fast and attempted to initiate radio contact. The vessel jettisoned bales of contraband into the ocean and refused to comply with instructions. Warning shots were used to signal the vessel to prepare for a boarding. The noncompliant Go-Fast then came to an abrupt halt and was boarded. Boarding team members recovered 27 bales of cocaine from the water, totaling 540 kilograms (worth an estimated $10.8 million) and detained the three suspected drug smugglers.

The Tahoma crew participated in the transfer and custody of 50 detainees and 1,893 kilograms of contraband with several other Coast Guard cutters in both the Eastern Pacific and the Caribbean Sea. 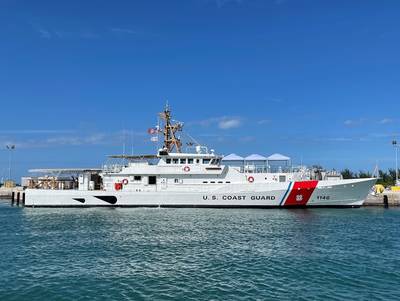