Russia’s Amur Shipyard in Vladivostok has revealed that the Steregushchiy-class corvette Rezkiy has reached an important construction milestone and that the main engines and diesel generators on the corvette have been turned on.

As a result of multi-day preparation and consultations with representatives of other parties involved in the project, the engines on the corvette were turned on and the starting of “the engines went as usual and without failures”, according to the company.

“A colossal preparatory work was done, in which workers of the assembly and delivery production, the testing department, electrical and pipe installation production, and the engineers from the company were involved… All mechanisms are serviceable and ready to accept the load,” said Razhden Baratashvili who is responsible for the delivery of the ship.

Also involved in the project were Russian companies Kolomensky Zavod and PAO Zvezda.

The starting of diesel engines and diesel generators is another important stage in the construction and an indicator that all systems are in service and ready to perform subsequent tasks within the test program. The specialists of the commissioning team and contractor organizations noted that the automation and control systems of the ship are also mounted and work without problems.

In early December, Amur Shipyard revealed that the corvette is scheduled to enter sea trials in January next year.

The ships of the Steregushchiy class are multipurpose corvettes, designed to replace the Grisha class. Such ships are used for littoral zone operations, engagement of enemy submarines and surface ships, and gun support of landing operations.

The first batch built at the Severnaya Verf shipyard in St. Petersburg consists of four ships. A second building line is planned to be finished at Amur Shipyard. Their displacement reaches 2,200 tonnes, their speed is going up to 27 knots, and the maximum cruise range is 4,000 miles. 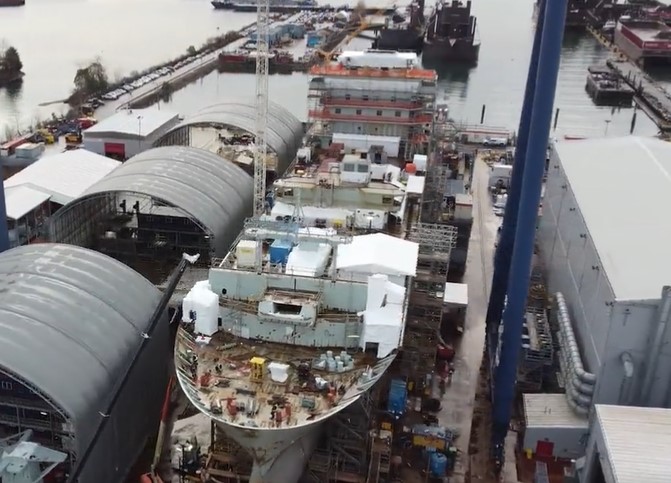